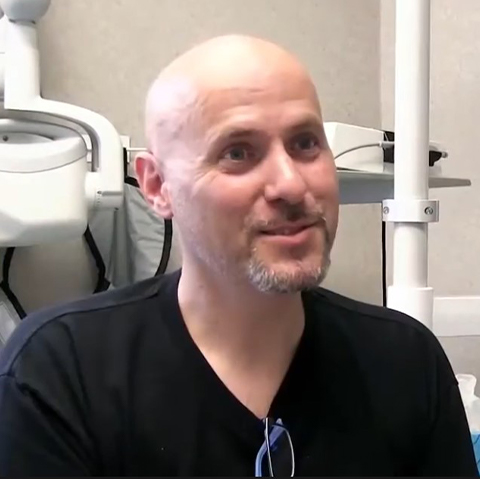 Hello, my name is Raul. I’m 47 years old. I’m a patient of Dr. Sonick. The reason I went to see Dr. Sonick was to have an implant — the crown removed, the tooth removed, the bone graft, and then the implant. When this happened, it was a very sensitive matter because I already had the root canal on it and a crown, so there was already a lot of work that was done on that tooth. [When the original root canal was not done correctly,] I was very shocked. Financially, I was very shocked as well. So when I came see Dr. Sonick, I was not in the best state of mind. I also went to see somebody else before him and that person did not have the ability to explain to me, in the best way, the situation. But when I arrived in Dr. Sonick’s office, I immediately start feeling better inside. Outside, of course, I was upset and frustrated with myself. After Dr. Sonick talked to me for five minutes, I was very relieved and I felt much better. He gave me a lot of options. Dr. Sonick is a doctor that likes to educate everybody around himself, his staff and his patients as well. I benefited from that a great deal because it gave me a lot of hope. He gave me choices and I felt like I was being taken care of. I’m very grateful that I met Dr. Sonick, Dr. Ma, and the whole staff. This is a great place for you, and for anybody else you love to come to be taken care of. Nobody has ever called me so many times like they have. Nobody has ever done so much for me as a patient. I highly recommended them, and I hope that you don’t have to learn the way I did.